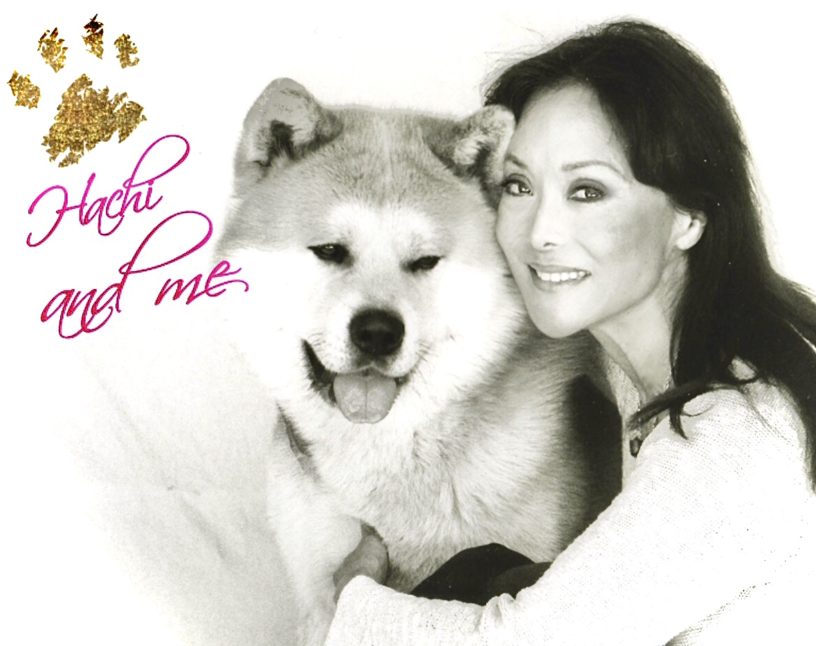 The compelling reason for making this film was to share the intense connection between man and dog. For dog lovers, this simply confirmed what they already felt. But, for those with different backgrounds, this was novel — the idea that dogs have emotions and, beyond that, a profound emotional intelligence that defies explanation until you experience it. Quite a few of the details in the film came from experiences with my own Shiba Inu named Hachi. The fact that dogs can grieve as humans do was important to share with the audience. Hosted by the Japan America Society, a screening of Hachi: A Dog’s Tale took place on the immaculate grounds of the Riviera Country Club in Los Angeles. To announce the event, I was asked about the story behind the making of the film. The following interview exerpt was featured in their newsletter. What was your inspiration for creating the movie: Hachi, A Dog’s Tale?   I first saw Hachiko’s bronze statue while visiting Tokyo. When I learned the story of the loyal dog of 1930’s Japan, it struck deep emotions in me. I adopted a Japanese Shiba Inu puppy upon my return. I named him Hachi. It was Christmas, he had a red bow around his neck and he was so serene for a puppy. I fell in love, and our deep bond continued for 16 years. We were inseparable. When I traveled, he stayed with my parents who considered Hachi their “grand dog.” Once I stayed with a friend at his lovely St. Paul de Vence home in France, and was being urged to stay longer. I had been away for a week and had promised to be back to care for Hachi. My dear friend joked about it for years. He was aced out by a dog! Hachi had such a calm spirit and I’d call him Buddha sometimes. I really was in awe of his dignified being and the grace I felt in his presence. Any issues of my busy and sometimes complex life really paled when I was with my canine friend. He had this quiet power that emanated from his soul. When Hachi passed away, even though his physical body was gone, his spiritual energy was very much alive. It was incredible. The deep affection we shared over the years continued to illuminate my days and nights. When I met Paul Mason, a respected TV/film producer of more than 40 years, I shared the story of the beloved Japanese dog and how it impacted my life. Paul was not a dog person, but I was passionate about my belief in this tender love story. He finally agreed to mentor me through the film process and that’s how it all began. How did you and Paul approach Richard Gere to not only star in the film, but to co-produce with you? The first person that popped in my head was Richard Gere. I knew of his deep respect for Japanese culture. I was asked for alternative choices. I had none. Richard’s agent read the script and loved it. He warned Richard that his character dies midway and the dog was the star. As Richard tells it, he had a deep response from the start. He would tell people about the story and become quite emotional. That’s how Richard Gere became attached to the film, not only as the star, but as my co-producer as well. He had an intense visceral feeling about Hachi’s story. During the production, Richard and our director, Lasse Hallstrom, were hands on, all the way. Tell us a little about your mother’s connection to JAS from many years ago, and how that might inspire you to become more involved with JAS. My parents were very involved in JAS during the earlier years, and I recall all the interesting events and people they would talk about back then. They have always been at the heart of the Japanese American community. My father, Thomas Shigekuni, had a primarily Japanese-American law practice for more than 45 years. He helped set up some of the early Japanese companies, such as Sega, here in the U.S., and promoted ideas and acts that increased respect and equality for those of Japanese ancestry. Ruth, my mother, was raised in Oklahoma City and was always the spark plug of the family. Similar to my grandmother (Oklahoma City’s Woman of the Year), she is very social and enjoys meeting new people, discovering new places to visit and is always steps ahead of everyone else. Through JAS, my mother was able to expand her circle of friends while having lots of fun whale watching, viewing exhibitions, attending special events and essentially supporting the organization that was founded on maintaining close relations with Japan. Unlike my parents, I never really was involved in my Japanese heritage until the making of “Hachi: A Dog’s Tale.” It was only after I visited Tokyo to discuss the project with Shochiku (the film production and distribution company) that I got to know Japanese on a personal level. I had always believed that the Japanese corporate structure was remote somehow. To my delight, nothing could be further from the truth. Through my film, I’ve met exceptional individuals, such as Misako Ito, director of the Japan Foundation Los Angeles, and the charming Consul General of Japan, Jun Niimi, the marvelous diplomat who works tirelessly to share the Japanese culture of dignity, passion and honor. The JAS is the best way to gain access to this active community, and I plan on spending more time on this myself in the near future. Afterthoughts: Hachiko’s story was a passion of mine for years. When I think about it now, it’s amazing that it got made! With no film background, just a hope and a (big) dream, there were a few ups and downs along the way. A prolific entertainment executive for years, our executive producer Paul Mason, had seen it…done it. He would caution me that most films, like mine, never got made. … END_OF_DOCUMENT_TOKEN_TO_BE_REPLACED 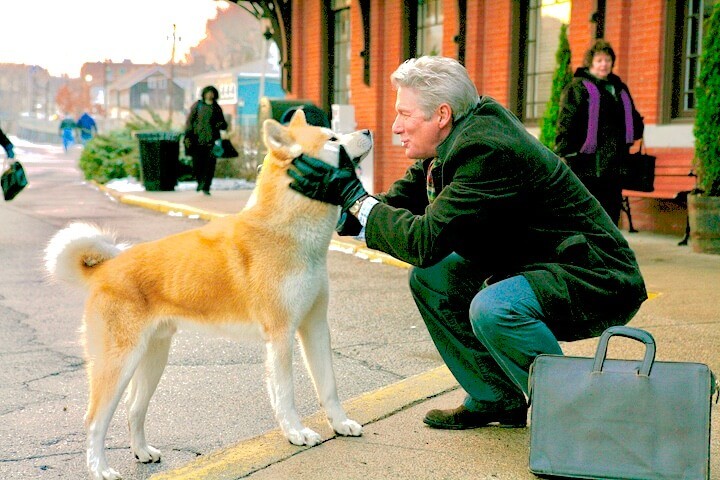 Richard recalls the moment the trainers introduced him to the dogs. About four weeks before shooting the trainer said, ’It’s time for you to meet the dogs’. It was a decisive moment, because if we didn’t get along, we had to find three other adult dogs and start from scratch again. 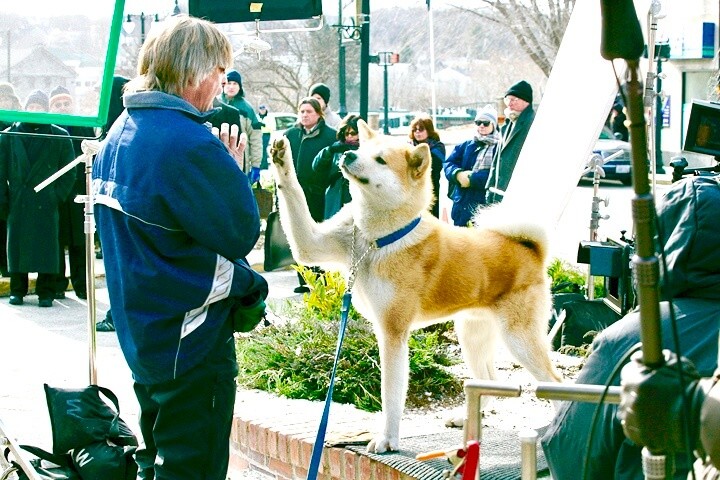 There’s an old saying actors have, “Never work with babies or animals.” Thankfully, in our case we had incredible animal trainers behind the scenes, ensuring that the dogs were taken care of- and the actors too.

Boone’s Animals For Hollywood has been training animals all over the world for over thirty years. Their reputation with producers and animal groups is sterling, as is their uncanny ability to connect with each dog. An incredible sight to see, Boone always placed his concern for the dog’s well being over everything and anybody else, working closely with the American Humane Association to ensure proper treatment always.

We felt that as the original Hachiko was a Japanese Akita, this breed needed to be portrayed in order to honor him and his story. But there was a bit of worry at first. Akitas are known to be very independent, strong thinking, and even our seasoned animal trainers had never worked with the breed before. It all turned out perfectly however, and both human and canine actors bonded beautifully.

The Hachi character goes through a wide range of emotions through an entire lifetime. To play Hachi as a puppy, we used the smaller Japanese breed, the Shiba Inu.

The need for multiple adult dogs stemmed from the long working hours and the need to have different personalities in various scenes. Chico and Layla, are brother and sister, and were two years old during the production. They played the young adult Hachi. Forrest, the older four year old Akita, played the aged Hachi. Each time he’d find a new cast member, I’d drive up to the training ranch to meet them.

It was truly amazing to watch how professional those Akitas were. They performed like seasoned pros, and delivered exactly what Lasse, our director, asked of them. Lasse had in mind a specific vision, mood – and the Akitas performed – on their mark and they knew all their lines!

Having all the captivating dogs and puppies on the set fostered an unusually easy and fun loving atmosphere. 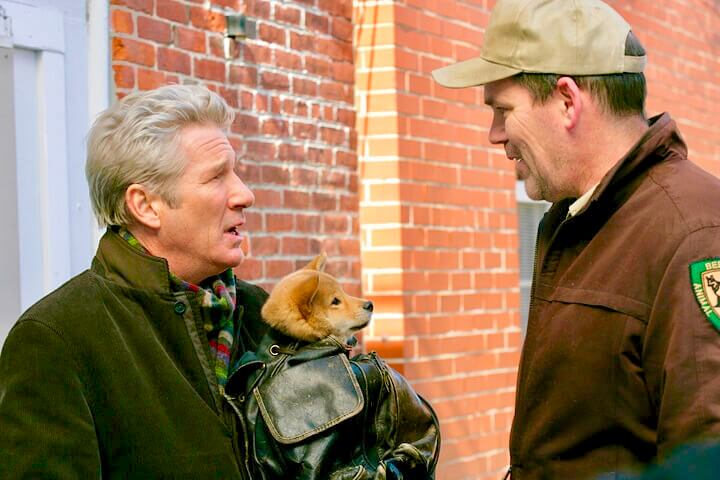 The American Humane Association ensured that our Akitas adults and Shiba puppies were comfortable and safe during the entire shoot. Animals appearing in film and television are testaments to the human-animal bond that is evident in their interaction with their trainers and with cast and crew members, and ultimately, in their effect on audiences.

They are the only organization authorized to issue the “No Animals Were Harmed” end- credit disclaimer, and they set the standard for the humane treatment of animals. They protected our animal stars from any potential harm, and it was a pleasure having them on our set.

American Humane currently monitors 70 percent of known animal actions in film and television productions. This amounts to approximately 2,000 productions annually, where they combine animal welfare and behavioral expertise to care for animal actors and protect their interests.

American Humane currently monitors 70 percent of known animal action in film and television productions. This amounts to approximately 2,000 productions annually, where they combine animal welfare and behavioral expertise to care for animal actors and protect their interests.

The American Humane Association believes that all animals should be treated humanely throughout their lives.