Creating the Hachi film was an incredible experience for everyone involved. The professional team and amazing dogs made each day memorable and special. The warm bond we formed on-set showed up as magic in the film, enabling Hachi to touch so many lives. ~ Vicki Wong

The Well-Being and Safety of our Animal Stars

The set of Hachi: A Dog’s Tale was extra animal friendly with many of the cast and crew showing up for work with their own canine companions, who were often wearing coats and sweaters. While training and filming, we worked closely with the American Humane Association (AHA) to ensure that all animals were treated well throughout the process.

The AHA reviewed the script in advance and set careful guidelines for the dogs’ comfort, especially the puppies - who can tire easily, are vulnerable to the cold and must be rotated on a regular basis. Much of the film was shot in Rhode Island during the winter, so freezing temperature was a concern.

To keep them safe, the wardrobe department designed little custom jackets for the puppies with special warmers inside, the same color as their coat. In the scenes where the young Hachi is in the satchel or wrapped in Richard’s arms, the audience may think the pup is freezing but they’re actually nice and comfy.

Thanks to the diligence and oversight of the AHA, Hachi: A Dog’s Tale was awarded their highest rating of “No Animals were harmed in the making of this film.” Animals deserve respect!

Boone Narr, the owner of Boone’s Animals For Hollywood, has trained animals all over the world for over three decades. Having earned a sterling reputation with producers and animal groups alike, Narr has an uncanny ability to connect with the animals. Narr felt Hachi: A Dog's Tale was better than any dog script he had read in years but knew its success relied heavily on the audience’s emotional connection to the dog.

When everyone told Narr that Akitas were difficult to train because they have a mind of their own, he thought, “Okay, that’s a challenge. I’m going to do it!” Unlike many dog movies this story did not involve animal trickery. The challenge for his team was making the dogs act in a way so people would “feel” for them. After months of intense training, Narr and his team achieved the desired breakthrough, so the Akitas could deliver the emotions the film so desperately needed. And then some.

“I’ve read a hundred scripts in my career, and few have moved me to tears. Hachi: A Dog’s Tale was one of the best moviemaking experience of my career, and I will pass down memories of it to my grandchildren”Animal Trainer Mark Harden. A member of Mark’s family, Chico patiently waited for Mark’s return around 5 o’clock each day.

Since the original Hachikō was a Japanese Akita, we chose to portray the same breed in the film to honor the dog and the true story. But Akitas are known for their independent character and strong-willed nature, and our seasoned animal trainers had never worked with the breed before. However, humans and the dog stars forged a beautiful bond, and it all worked out perfectly behind-the-scenes.

Multiple Akita dogs were trained for the Hachi: A Dog's Tale. Due to the long working hours and the need to have different personalities showcased in different scenes, this was essential.

To play Hachi as a puppy, we used the smaller Japanese breed, the Shiba Inu. We chose three Akita dogs to play the adult Hachi, training each specifically for their starring roles.

Portraying Hachi as he aged and endured a range of experiences and emotions throughout his life required dogs with differing natures. All three Akitas captured his essence, and the film became a successful tribute to Hachi and his heartwarming story.

Brother and sister, Chico and Layla were two years old during the production. Each played the young adult Hachi. Forrest, a 4-year-old Akita, played the aged Hachi.

All the dogs performed like seasoned pros, delivering exactly what was asked of them. Director Lasse Hallstrom had a specific vision and mood in mind, and the Akitas performed on their marks and learned all their lines! Having all the captivating dogs and puppies on the set fostered an unusually easy and fun-loving atmosphere. 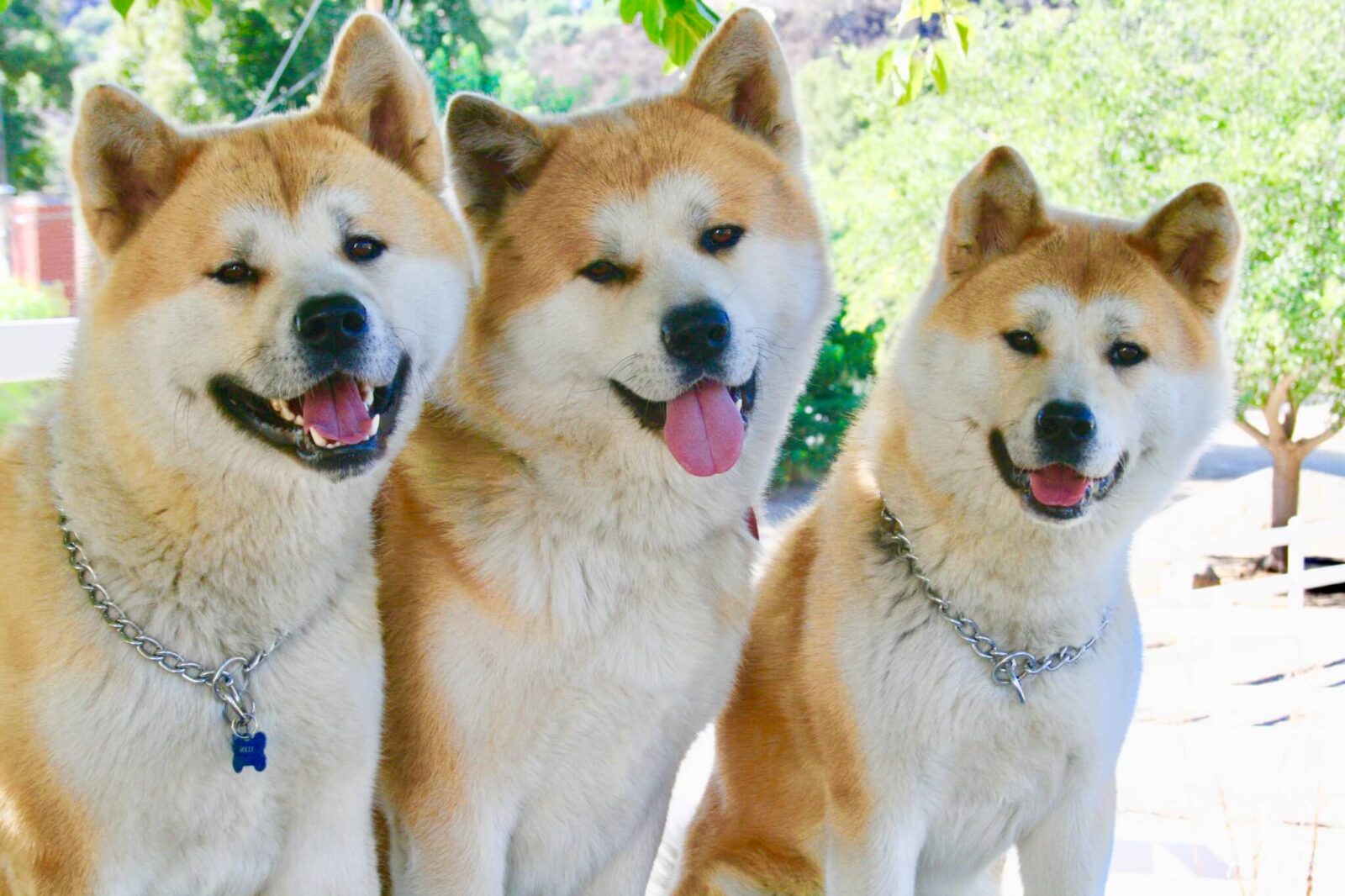 Of all the dogs Mark Harden trained, he found Chico to be the most challenging. Mark had to be innovative in working with the independent Akita. Chico barely glanced at him for the first month, deciding not to eat whenever the trainer was around.

Mark had to find a way to get inside the Akita's head mind-set, as the usual animal training was not being effective.

So Mark decided to teach Chico a specific sequence of behaviors that film viewers would interpret as particular "feelings". In place of obeying commands like sit, stay, speak - Chico was taught specific tasks on an agility course. Chico could see a tunnel and go through it, with the prop becoming his cue. He would perform the action, and in return, be rewarded with a treat. The process became a game for Chico.

Because Chico was the most aloof of all the dogs, he was best used in scenes that required him to be standoffish with strangers. In one scene, when Hachi waited for Parker at the train station - the part went to Chico who could be oblivious to bystanders and even to a playful poodle.

Chico was also used when Parker’s family came to retrieve Hachi from his waiting place after Parker’s death. We needed a dog that would appear reluctant to leave the station. Layla would have eagerly jumped into the waiting car!

But Chico was not always remote. Our most active Hachi dog, he was ideal in action scenes. In one such scene, you’ll find it was Chico frantically digging under that fence.

Always greeting everyone with a kiss, Layla quickly earned her nickname “the kissing dog.” Naturally, she was chosen for the scenes to portray the bond between Professor Parker and his constant canine companion. Because of her outgoing, warm personality, Layla evoked emotions in the actor Richard Gere that were vital to the film’s ability to convey the  enduring bond between man and dog.

In one scene, when Parker's friend Ken arrives at the train station, Layla sweetly “ad-libbed” her part, offering her paw as she said hello.

While some scenes required some creativity in order to get Layla to do what we needed (like baby food on Richard’s neck to get her to jump up), the scenes where Richard massaged Layla never needed any embellishment - Layla loved her massages! At one point, Richard spent nearly an hour with Layla to capture the perfect shot, giving her plenty of warmth and attention. Layla was in doggy heaven!

But it wasn’t just the massages Layla loved; she adored playing in the snow. On the night we filmed Hachi's final scene with Professor Parker, we rushed to the train station to capture the fresh snow and Layla was as excited as can be.

As we used three Akitas (two males and one female) to portray the adult Hachi character, trainer David Allsberry recalls that during the filming Layla began to go into heat -  "I created a custom hairpiece to cover up her lady parts" After all, Hachi is a boy!

Even though he was a younger dog, Forrest beautifully played the role of Hachi in his last days. Trainer Mark Harden taught the Akita to move cautiously by stepping one-by-one on dozens of small marks, lowering his head as he watched each placeholder. But acting like an older dog was just one part of the role.

Mark performed the remarkable makeover himself. Who could guess that the ragged, limping Akita was only a four years old!

Groomer’s chalk was applied to dull the sheen of Forrest's coat. During the teary station scene when the elderly Hachi's life flew past in a final flashback, Forrest wore nontoxic makeup and small, warmed magnets were placed on his ears and tail to lightly weigh them down - giving him an aged appearance. Once in a “down and stay” position for a few minutes, Forrest would became sleepy and close his eyes.

When needed on set, Forrest would arrive very early to reduce any stress caused by rushing around. This helped him to stay sedate, so when the camera rolled, the Akita could more easily portray the magnificent, mature Hachi seen on the screen.

Can’t get enough Hachi? Learn how to transform your life by uncovering your inner Hachi, bringing out your best canine qualities and reminding yourself why how you live each day really matters. Sign up now for our exclusive FREE "Be Hachi. Be Happy." eCourse » 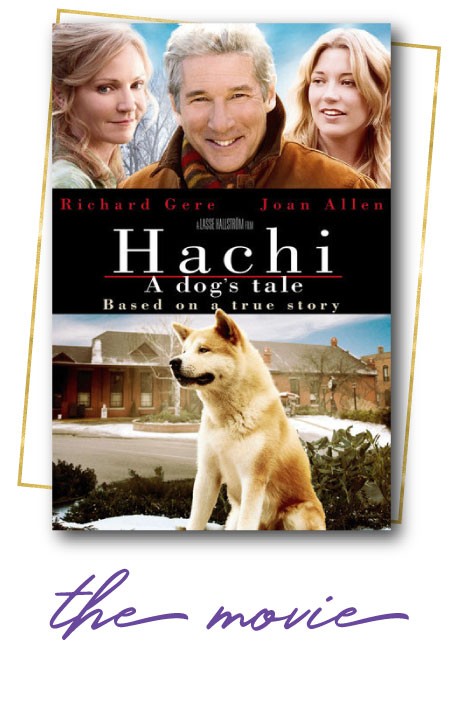 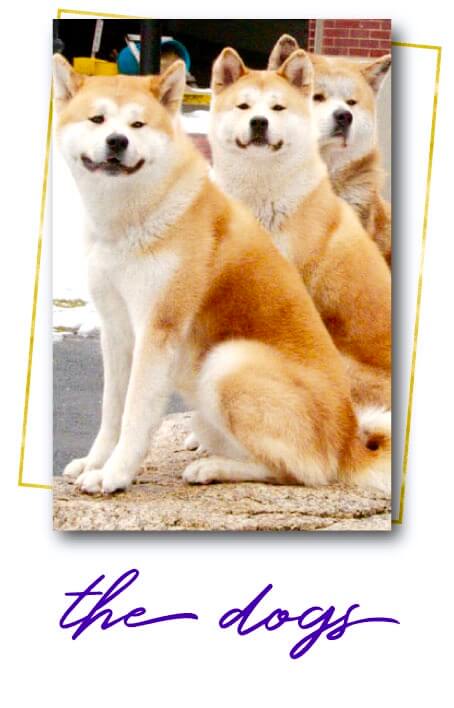 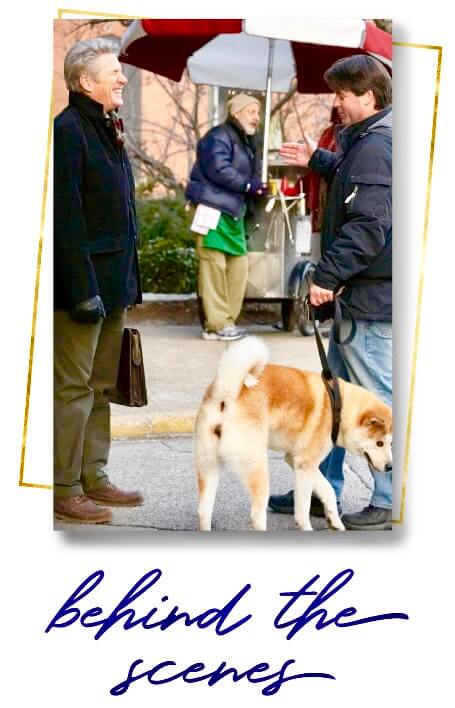 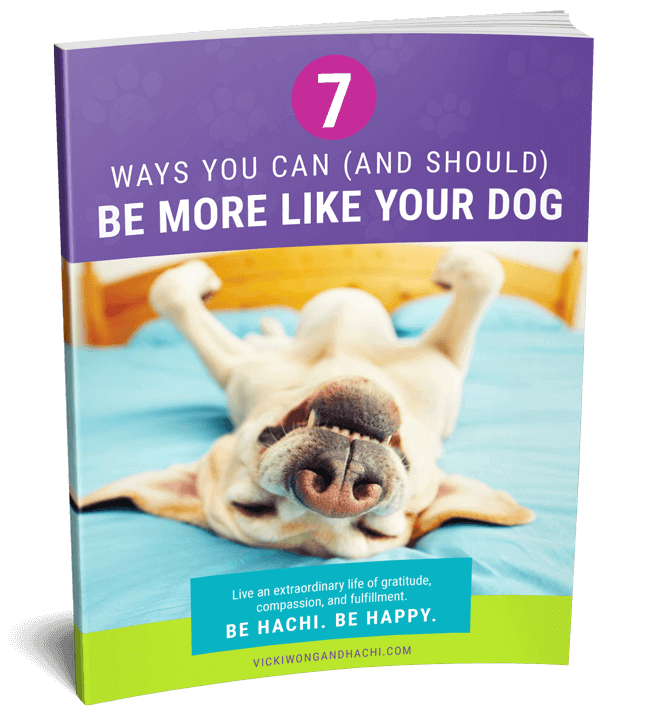 Info about Chico and Forrest as described in trainer Mark Harden's chapter of Animal Stars: Behind the Scenes with Your Favorite Animal Actors.