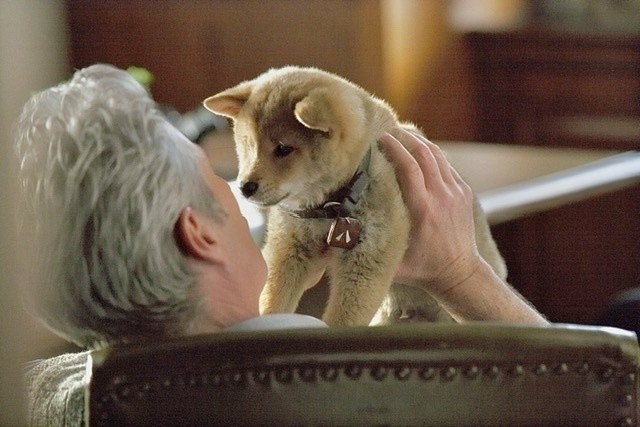 There is much speculation as to Hachi’s actual day of birth. There is no record of an authentic birth certificate for Hachi, so his precise birthday is unknown. However, the best clue to determine his actual birthdate is the day he left his birthplace at Ōdate to meet his new owner, Professor Ueno.

It has been established as fact that Hachiko left Ōdate on January 14, 1924. His breeder Saitō Giichi would send off his Akita puppies when they became two months of age. If puppies were younger than that, they would be too weak to withstand a long trip (there was no air shipment at that time).

In turn, if puppies were older than two months, it would be difficult for them to establish a bond with a new owner. Akita puppies specifically are known for the need for early bonding.

In considering these two age-related factors, my conclusion is that Saitō Giichi must have sent his Akita puppies off as soon as they became two months old. His wisdom matches well with the concern of veterinarians today that many breeders sell puppies prematurely before the age of two months. Providing proper care and treatment is necessary at this critical stage of their growth.

The train from Ōdate Station to Ueno Station ran every day. So, it was possible that Saitō Giichi could send a puppy off precisely when it became two months old.

All things considered, it’s most accurate to conclude that Hachi was born approximately on November 14, 1923. 🥳

Who would believe a frail puppy would have the strength to capture the hearts of an entire nation…then the world? But as we know, he did. Now, thanks to Hachi historian/author Mayumi Itoh’s landmark research, she traces every step of his miraculous story.

In each Hachiko Snapshot, you can follow Hachi’s incredible journey from sickly puppy to worldwide icon. On the 14th of each month – right here on the blog.

Mayumi is best known to Hachi friends for Hachiko: Solving Twenty Mysteries about the Most Famous Dog in Japan. She is the author of a dozen books on politics, including Japanese Wartime Zoo Policy and Animals and the Fukushima Nuclear Disaster. In addition, Mayumi has written 22 haiku collections including Haikus for Hiroshige’s One Hundred Famous Scenes of Edo.