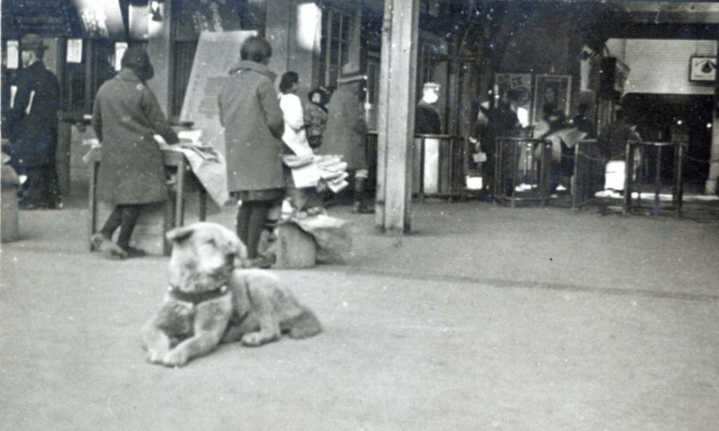 One Hachi fan penned a powerful poem dedicated to the loyal Akita. The love for this devoted dog knows no bounds. Thank you to Daniela Caride for sharing her poem with us. She first posted it in her “Daily Tail” blog.  I sobbed for two hours straight watching “Hachi, a dog’s tale” (I still have a headache) — a movie inspired by the real story of Hachiko, an Akita dog who achieved international fame for his loyalty. The dog waited for his deceased owner for nine years at the train station. I realized that Hachi became a symbol of loyalty not because he was better than any other dog. Dogs are exceptionally loyal if treated with love and respect. But nobody offered Hachi a loving home during the long years he waited for Professor Ueno. It broke my heart. So I wrote the poem below. I humbly ask you to send this post to every person you know who may be able to find a home to a pet in need. Together we may be able to ease the pain of homeless animals like Hachi, who ask for so little and give back so much. Hachi waits By Daniela Caride Hachi waits at the train station The dog waits for nine minutes It’s after five It’s time And the professor doesn’t arrive Hachi waits for nine hours Nine days The professor is late But the dog doesn’t mind At the train station he stays Hachi waits for nine months Nine years straight He’s convinced the professor is really late But the dog doesn’t mind At the train station he stays Tired of old age, not tired of his long wait Hachi finally closes his eyes And finds his friend In his deepest dreams inside At the end But Hachi still waits Even after he died He waits on the streets of every town At all the neighborhood pounds Under the skin of every dog around For someone to rescue him To give him A name Water Food And a home Where love abounds It’s true that this dog’s love knows no bounds. Hachi brings out deep emotions in us. We can use them to get in touch with our innermost hopes, fears and desires. Did his story provoke any surprising feelings in you?