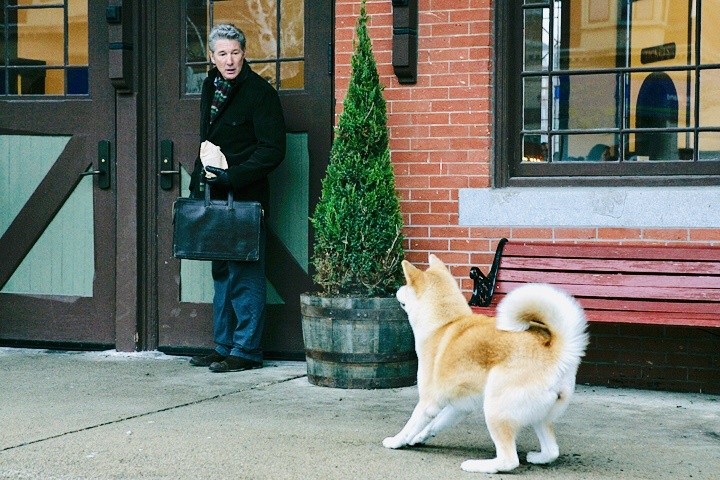 Hachi: A Dog’s Tale saw a few talented, monumental dogs play Hachi himself. Layla was one of them. Let’s get a Layla update since she played Hachi. 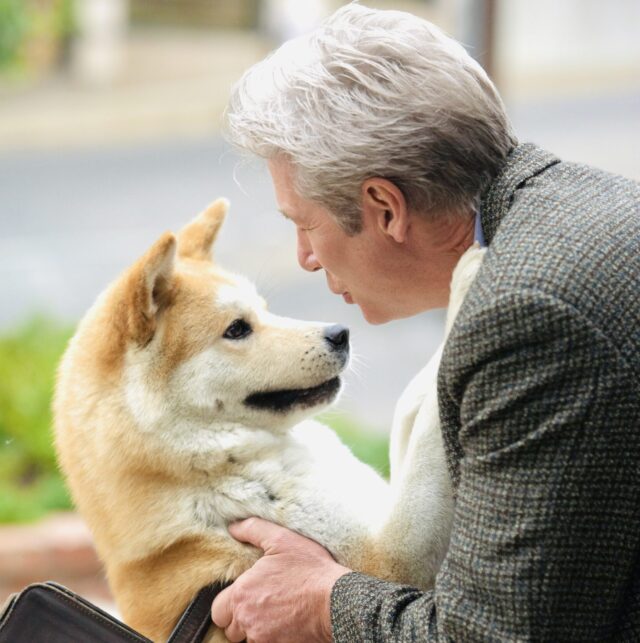 What is your favorite toy or past time?

My favorite toy is a huge stuffed toy Godzilla that I can barely get my mouth around. It makes me feel really strong when I drag it around the house.

My favorite past time is strolling the paseos in my neighborhood. I always meet interesting and nice people and some even recognize me from my movie! I always play it off as no big deal to be in a movie with the fabulous Richard Gere, but secretly I am really pleased by the attention.

What was your favorite scene you were in from Hachi: A Dog’s Tale?

There are so many to choose from! I would have to say the scene where Richard is giving me a massage. It was so relaxing I could have laid there all day!

Aside from Hachi: A Dog’s Tale, what other films or live appearances have you made?

I have appeared as “Bark” in 3 Pupstar films. They are good fun as I play the bad guy (I know, hard to imagine) and a male once again. I had a small but pivotal role in The People vs. O.J. Simpson TV movie as the Akita that discovers the bodies.

I was in an episode of Revenge along with my brother Chico. I did an internet safety video for Delta Airlines. Also commercials for Samsung and Geico Insurance. I have also greatly enjoyed attending screenings of Hachi: A Dog’s Tale at the Japan America Society and meeting so many wonderful people.

What do you dream about?

I mostly dream about chasing stuff. My yellow ball from Hachi (which I still have and still run after) and opossums. I’ve caught 2 (I must admit they are rather slow) but I didn’t hurt them and 1 raccoon who hurt me a little.

I won’t do that again! But in my dreams, I always win and they never ever come back into my yard. 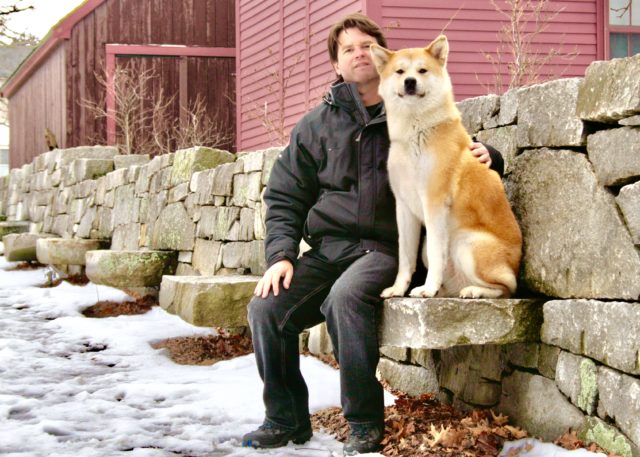 Hachi: A Dog’s Tale is a really special movie for me.

Not only is it a wonderful movie which is nice to be associated with, it gifted me with the most amazing animal in my career: Layla. What a beautiful and sweet girl. I’m so proud of her performance in the movie.

Her lovely, outgoing personality was vital for the scenes with Richard Gere as you see their bond form and realize the depth of their love. Richard was so wonderful to work with and so kind to Layla.

He treated her like an actor in that he knew her performance was vital to the film working, and would do whatever I needed to allow Layla to do her job. She loved jumping up on him and giving him kisses, but if I needed a little baby food on the neck to keep it going take after take, no problem.

If I needed to speak some commands to Layla to get the behavior perfect, he would always say go ahead and he would clean up his lines in post.

I know she absolutely loved getting massaged by Richard. I remember for the scene in the shed where he is massaging her, we were out there close to an hour, just Layla, myself and Richard. The camera was inside the house looking out and he just kept on giving her so much warmth and attention, we were talking about Buddhism between takes and it is one of my favorite moments from the entire shoot.

Other memories are how beautiful and happy Layla looked in the snow.

Like she was in her element; racing to the train station on short notice one night as it was snowing for real and we got the scene where Layla greets Richard after Hachi’s passing.

How cold it was in Rhode Island in winter and how absolutely glorious it was to come back in June for the final 2 weeks of filming. How adorable Layla acted for the scene where Joan Allen is gardening in the backyard. For the first time in my career, I had to create a
little hair piece cover up for her lady parts as she went into season during the filming.

I like the scene where the character of Ken comes to the train station and Layla ad-libbed reaching out her paw to say hello. So many great memories of Lasse, our director, getting himself all bundled up to brave the cold outside the train station to let me know how beautiful Layla’s performance was. What a lovely and kind man and director.

Thank you, everyone associated with the movie, for creating a wonderful set to play on! A definite highlight of my career.

David announces the passing of Layla:

I wanted to pass along the sad news that Layla has passed away. As I mentioned, she had cancer in her spleen and had it removed in December. At the time, we had hope for 3-6 months of good health before the cancer would reoccur, but it was only 2.

She had many great days in that 2 months being with her animal and human friends. It was only in the last couple of days that I sensed it was getting close to the end.

She ate a little bit on her last night and I heard her at about 5 am making some strange noises and she had some labored breathing. I knew that I would need to call my vet to come to the house that morning. I sat with her for an hour, telling her how much she meant to me, and beautiful and special she was. She passed at about 6:15 am.

Of course, I am completely devastated by her passing. My dear sweet Layla. I’ll love her forever and see her again on the Rainbow Bridge. Or who knows, maybe it will be a train station for us!

Affectionately known as the “kissing bandit”, Layla spread affection and light to everyone. She loved meeting (and kissing!) people, and I’ll always remember the Hachi screenings she attended. After, everyone waited in a long line to take a picture with the lovable star. Generous to the end, Layla happily greeted everyone. Thank you for the memories, Layla and David!

Layla contributed such a pivotal part of herself for the film Hachi: A Dog’s Tale. Along with brother Chico and Forrest, the three worked beautifully together to create the emotions you see in the film. Affectionate and enthusiastic, we used Layla in scenes that required warm and fuzzy! She and Richard got along famously. You can add your tribute to Layla below!

When I’m not sure of my guest’s food preferenc

Ever have a crazy dream? James Michener’s novel

Just the two of us today. Sharing memories. My mot

Everything tastes better eating outside. Especiall

This private oasis was just what I needed. A few d