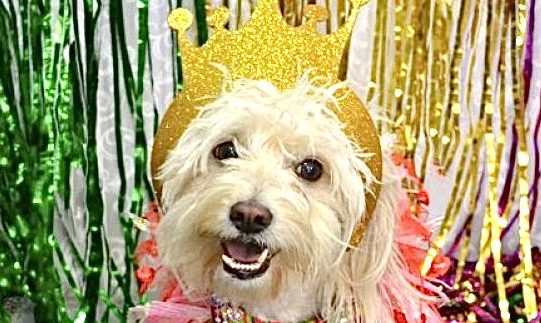 I receive emails about animal devotion, heroics and messages about faithful dogs from all around the world. Here’s another heartwarming story to share about Sophie, a very tenacious and brave dog friend.

A sweet pup, Sophie had a life of ease for over a year when her family adopted a puppy named Lulu. Playmates for a few months, the two pups were playing in their backyard when a coyote lunged at Lulu.

Sophie’s family heard a cry and raced out to see 2-year-old Sophie defending her 7-month-old sister. After scaring the coyote away, the family tended to the injured Sophie who suffered surface wounds to her neck, right shoulder and side. The family took the injured dog to a veterinarian, who stitched her up and put her on antibiotics.

After the attack, the family decided that their backyard was too dangerous for the two dogs, so they took them to the Helen Woodward Animal Center. Located on 12 acres in San Diego County, California, the center is a no-kill non-profit organization that has helped animals for over 45 years. The story behind the woman whose name is on the center is fascinating in itself. 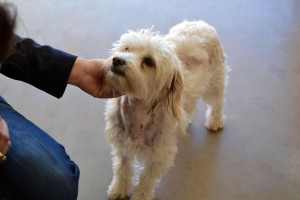 A few days after the incident, a local family adopted Lulu. Sophie, however, needed the supervision of veterinarians before she could find her forever home. Shortly after she healed from her procedure, Sophie’s story was on the news. “This hero protected her canine friend from a coyote!” reads a post on the Facebook page of the Helen Woodward Animal Center.

Immediately, call started coming in from 11 different states to ask about adopting the “brave dog.” To field the many requests, the center asked applicants to write a 300-word essay about why they wanted to adopt the brave pup, said animal center spokeswoman Jessica Gercke.

“It certainly is a story that seems to be resonating with people and moving people,” Gercke said. “I have taken her to a couple of media events, and when I walk through the lobby, people will stop me and ask, ‘Is that Sophie?”

“Sophie is worth it,” said Shannon Bush, who works at the center. “She really embodies every characteristic people hope to find in a furry family member — loyalty, heart and sincere devotion.”

According to a press release, Sophie’s new home will be unveiled during a “Mardi Paws” parade on Tuesday in Rancho Santa Fe. “We found the perfect family,” animal services manager Ed Farrelly said in the release. “We all want to celebrate and say goodbye.”

After fielding requests from all over the country, Sophie found her forever home with a family in Seal Beach, California. Kelly Hallmark and 8-year-old daughter Madison have a new family member after having lost two other dogs in the past few years. The single mom has always adopted rescued pets. Sophie’s new family has a female rescue dog named Charlie and a hamster named Frankie. They are sure to be safe with Sophie to the rescue!

I love these stories of animal faithfulness. Besides Sophie, there are many loving animals in need of a forever home. Doesn’t Sophie’s story remind you of Hachi? It’s all about a dog’s special gift of loyalty.