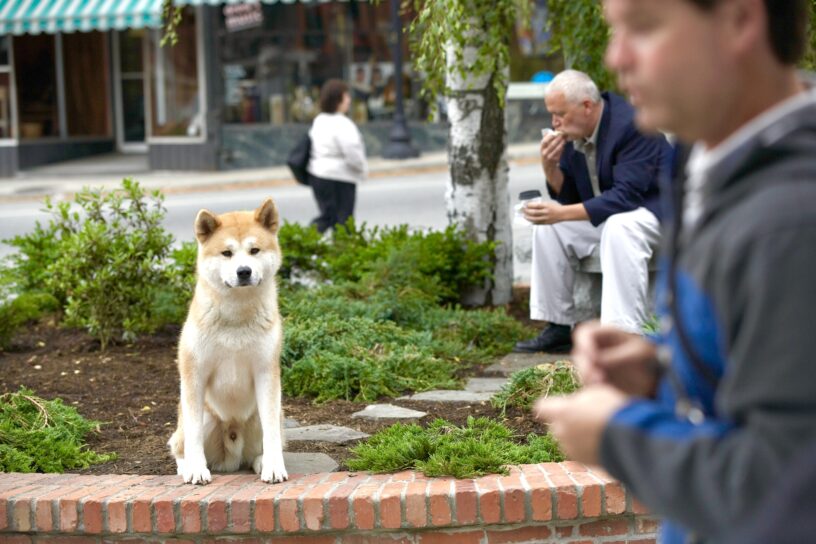 Most people did not know why Hachi went to Shibuya Station every day. The former gardener of Professor Ueno, Kobayashi, cared for Hachi in the later years. Kobayashi registered Hachi at the local police station and made sure that Hachi wore a collar and harness with an identification tag. Nevertheless, because the loyal Akita went to the station everyday, and hung around there alone — people assumed that Hachi was a stray dog.

Did Hachi Create Trouble at the Station?

The truth was that Hachi was well-behaved and dignified. He never barked at people, let alone bite them.  Nevertheless, station employees considered his presence a nuisance for the passengers. They often mistreated him — kicking and even dumping water on the faithful Akita.

Hachi endured getting his face painted with a mustache while children would tease and taunt. He was seen as a nuisance…an abandoned, unwanted beast.

Vendors who operated in front of the station also considered Hachi an unwelcomed pest. Vendors even went so far to pour water on the Akita hoping to make him leave and not return.

Moreover, some heartless people argued that Hachi went to the station simply for a handout of yakitori (chicken shish kebab) offered by a few kind vendors.  However, their argument is far from the truth.

Why did Hachi Keep Returning?

Despite the abuse, Hachi kept going to the station.  Why? Because Hachi missed Professor Ueno. The gardener Kobayashi’s younger brother Tomokichi, who walked Hachi most often, attests that Hachi missed the late professor dearly. Hachi was attached to the Kobayashis, but he responded to them differently from the way he used to react to Professor Ueno.

Tomokichi states, “The only two persons Hachi acted towards as if he were a puppy, wagging his tail, were Professor Ueno and his widow Yae. Hachi went to the station because missed Professor Ueno.”